And we are off!

The first workout of the 2019 CrossFit Open was announced last night.

If you missed it, this is what it is: 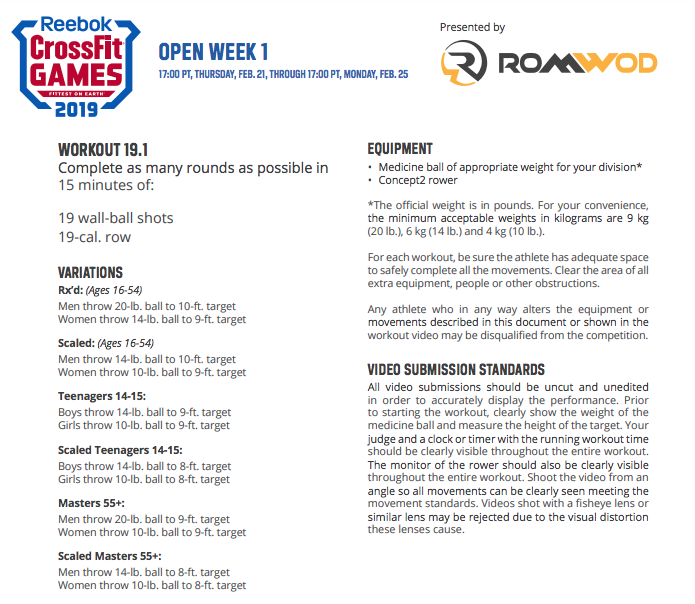 I am off to a good start with my Open tracking and predictions, because the night before the reveal I was asked what I was anticipating, and this was my response:

I mentioned to a few people in passing that due to the absence of wallballs in last year’s open, it wouldn’t surprise me if we see them in abundance this year…glad to see they wasted no time in holding that over our heads.

This workout definitely falls into the category of one that pretty much everyone can do. Although isn’t very glamorous and sexy, you should all know by now that even the most simplistic workouts can be effective tests of various facets of skill and fitness.

For those of you new to the CrossFit Open, this first week might be a bit of a learning curve for how things will flow.

For this week the OFFICIAL times I will be hosting the workout at the gym will be Saturday morning from 0840am-1020am. You can access the heat sign up sheet here:

ANYONE can reserve a spot on the heat sign up sheet.

I do ask that if you are registered or have intentions of registering online that you always make the effort to reserve a spot on the sheet if you are planning on attending on Saturday. If you aren’t registered and still wanting to participate, you may still claim a spot on the sheet, but you may also show up anytime between the designated heat times and I will work you into the workout. If time slots you want are full, contact me directly and I will arrange to get you in at the time you requested as best I can.

Needless to say, for the next few weeks, the Saturday morning partner workouts will be put on hold in place of the Open workouts. Please don’t let this deter you from coming to the gym. As mentioned in my original write up, the open is a great thing to experience at the gym whether or not you have officially signed up. So as always, I encourage anyone and everyone to make time to do the Open workouts over the next 5 weeks, whether or not you can make it Saturday. 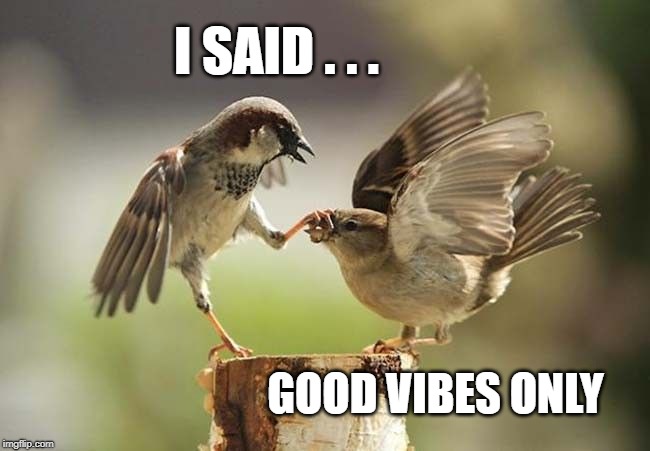 If you cannot make the time frame I have allotted for on Saturday, I will make myself available all day Friday, Sunday morning open gym between 9am-12pm, and all day Monday to accommodate those who want to do the workout. All I ask is that you reach out to me and let me know when you want to do it!

Shifting gears a bit, scrolling through social media after the announcement last night, I noticed a lot of disgruntled comments from the CrossFit masses who were upset with the new changes brought about this year for the open, or with competition season in general, and the quality (or lack thereof) in the online announcements/coverage of the workout reveal.

Don’t get me wrong, following the latest and greatest in CrossFit gossip and updates can be fun, but don’t let it distract you from what I told you the Open SHOULD be about.

My approach with the Open has always been primarily about our gym, our community, and YOUR OWN individual fitness pursuits. It’s been said the only thing that remains constant is change…and although the changes this year have shaken what some people have grown comfortable with in years past, announcement shows, live streams, and HQ hirings and firings shouldn’t deter you from enjoying yourself, supporting your fellow athletes, and simply just doing the workouts released from week to week.

I’ve already told this story to a few people, and some of the other CrossFit OG’s out there remember how it all went down in 2011:

2011 was the FIRST year of the CrossFit Open, and HQ was boasting 6 weeks of competition.

For 11.1 they was no live stream, no open show, no throw down. They were simply going to release the workout on a new website that was going to be specifically dedicated to the games season at 6pm.

I remember as a young, excited, and slightly obsessed coach I stayed up that evening past midnight hounding the website until the workout was finally released 6 hours later than originally promised. 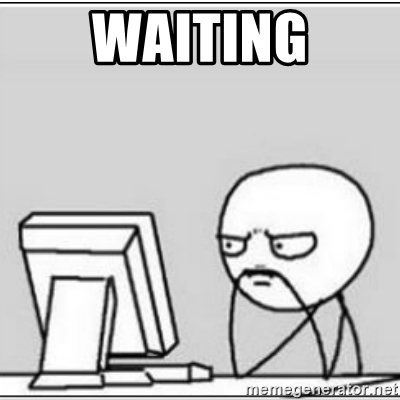 (And although it was after midnight, I still texted anyone and everyone I could think of to make sure they knew I was potentially the first one to see the workout).

The web troubles did not end there for HQ.

When the deadline to submit the scores for week one came, the website crashed again with the amount of volume it got from people trying to submit their scores last minute. The crash was so significant, HQ extended the deadline submission for 11.1 by another week. When it was all said and done, the first CrossFit Open in 2011 lasted 7 weeks!!!

After that year, the Open consisted of 5 workouts instead of 6, and the production and presentation of the workouts from week to week got bigger and more elaborate.

I can understand why some people were upset with the 19.1 reveal because that familiarity and grandiose production was not there. Or, maybe it was, but it was just different than what we have gotten used to. But someone who is new to CrossFit Open, probably didn’t know any better. So while big production became a “thing” for the CrossFit Open over the last 8 years, in my opinion that never actually defined the CrossFit Open. Although I am not a young coach anymore, in many ways I am still that excited, and slightly obsessed coach from 2011. I don’t need a fancy reveal show, a throw down, an update show, or 1 million strategy videos to get excited about the open.

Last night I pulled up the announcement streams on my laptop for those who came to the gym wanting to see the reveal, a routine we have had for the last few years every Thursday evening during the open. Amidst the confusion of what was happening on the monitor with poor video quality and audio, and while those around me were trying to pretend they understood French, I was ignoring what was happening on the laptop.

I was on my phone, on the games website, just hitting refresh…refresh….refresh….until the workout appeared.

At the end of the day, you can keep your fancy productions and suspense laden reveals. Just give ME the workout and the standards, and I will do the rest.

All YOU need to do is show up.

View all posts by wildhorizonscrossfit